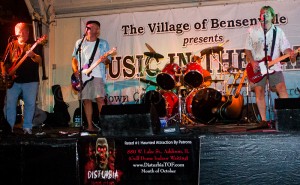 I spent more time blogging than shooting at Bensenville and recorded tow car stories: Glenn’s 1933 Chevrolet Street Rod and Ray’s 1978 Cadillac Eldorado Biarritz. The band in the park was Disturbia and some of the music they covered is here. I very much like shooting at night with the Bensenville Park in the background. 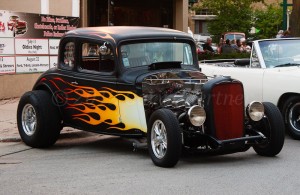 Glenn bought this ’33 Chevy street rod in 2000 off of eBay because it had a 409 Chevrolet motor. It also has 2 Carter AFB four barrel carburetors. The transmission is a GN 700R which couples with a Ford driveshaft and 9 inch positraction rear end. The front end is a Moordrop. The body is ‘channeled’ (the original floor was cut out and the body dropped into the frame by raising the body to frame mounting brackets). 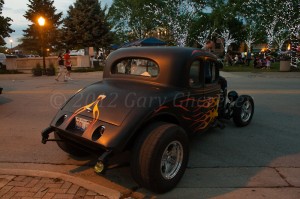 The original top was canvas not metal because the technology available in 1933 couldn’t form the current roof line. Hot rodders bent sheet metal when they stared souping up these machines in the ’50s. 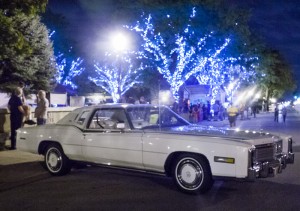 Ray’s dad bought this ’78 Eldorado Biarritz new in July 1978 and tried to give to Mom. She wouldn’t drive it because she ‘didn’t want a car that cost more than her first house’. Ray Sr paid it off in 11 months so there was no interest charge. Dad passed and since mom would have it, Ray Jr. got the Eldorado (and his wife does the driving !). Mom got a smaller car. 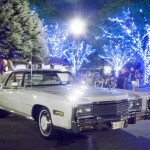 It has 27,000 original miles and power everything – windows, door locks, seats. A press of the door button turns on the interior lights! The car is all original except for paint and tires, which had dry rotted.

This entry was posted in 2012, 2012 Bensenville and tagged 2012, Bensenville, CruiseNight, YouTube_Links. Bookmark the permalink.