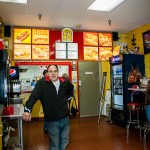 This event was rained out the week before and somehow Fil found sponsors to permit one last car show. At least 50 cars attended and Flashback 50s DJ Tony played 50s & 60s oldies until 8PM. Listen to a few of them here. 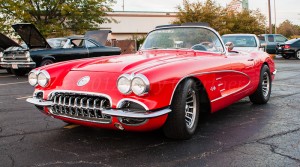 I struck up a conversation with Rich to find out about his red 59 Corvette. He bought it in 1978 as a ‘basket case’ in pieces. The previous owner had started restoring but didn’t get far. Rich had to take the body off to work on it; and then a new job took him to Michigan so the body went back on so it could be trailered to his new home. The exterior is restored original (in appearance) although he changed the color from the ‘original’ blue with a paint job in 1987. Since the wheels were mismatched, Rich found a good deal on later-model Corvette wheels. A 1990 Camaro motor and transmission start out the drive train. It still has the generator and a mechanical tachometer. The suspension is by Jim Myers and he added disc brakes. Rich drives it only to shows but has gone as far as Wisconsin and Indiana.
top of page

Dennis bought this ’29 Ford A-model ‘project’ from a fellow who needed money for dragster parts. A boat load of A-model parts came with the deal. Since Dennis wanted a hot rod and there wasn’t room in the garage for everything, he sold the surplus parts to a A-Model club. On one day, he got the 292 ‘Thunderbird’ motor and a three speed overdrive transmission and it took a year of a lot of hard work to have been able to bring the car out for the first time to Bensenville (the day before Wood Dale). The exhaust pipes were painted ceramic white but that peeled off so he used insulation tape the wrap the tubes.
top of page